Prof. Dongrui Wu visited our lab at and gave a talk, entitled “Fuzzy Logic and Signal Processing/Machine Learning for Brain-Computer Interface (BCI)”. Prof. Wu is currently a Professor at the School of Artificial Intelligence and Automation, Huazhong University of Science and Technology, Wuhan, China. He has over 120 publications, including a book “Perceptual Computing” (with J.M. Mendel, Wiley-IEEE, 2010), and five US patents. He received the IEEE Computational Intelligence Society Outstanding PhD Dissertation Award in 2012, the IEEE Transactions on Fuzzy Systems Outstanding Paper Award in 2014, the NAFIPS Early Career Award in 2014, the IEEE Systems, Man and Cybernetics (SMC) Society Early Career Award in 2017, and the IEEE SMC Society Best Associate Editor Award in 2018. He was a finalist of the IEEE Transactions on Affective Computing Most Influential Paper Award in 2015, the IEEE Brain Initiative Best Paper Award in 2016, and the USERN Prize in 2019. 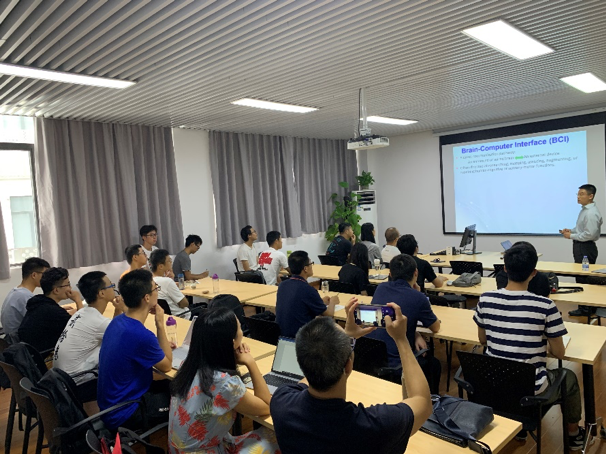